FIDELIO will train 14 young researchers  for next-generation bone and diabetes researchers. Each ESR will be enrolled in a PhD programme to study for a doctorate and will conduct her/his own individual research project. Interdisciplinary training and implementation of innovative approaches are the key. The training programme and experience of different international research environments with international leaders cuts across traditional data and life sciences silos. 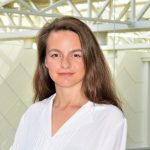 Lejla completed her BSc in Biology at the University of Copenhagen in Denmark, then achieved her MSc in Molecular Biology at the same university. She did her master thesis at the Finsen Laboratory and Biotech Research & Innovation Centre (BRIC) which focused on construction of antibody drug conjugates (ADCs) targeting macrophages in cancer. After her studies, she worked as a research assistant at the Department of Clinical Biochemistry at Rigshospitalet in Denmark, investigating the effect of P2Y12 receptor antagonists on bone turnover in a preclinical in vivo model.

Objectives: Regulation of Wnt signaling in the monogenetic db/db mouse as well as the polygenetic TallyHo mouse. Investigation of miRNA profiles to determine which miRNAs are associated with diabetic bone disease and target Wnt signaling and whether modulating specific miRNAs may qualify as a therapeutic strategy. 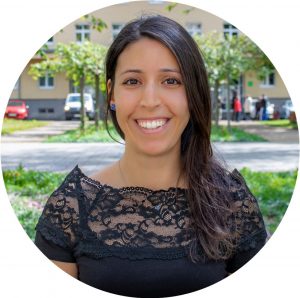 Souad graduated with a B.Sc. in Health Engineering from Nancy-Université, France. Afterwards she obtained her MSc in Pathophysiology & Personalized Medicine in Human Transplantation from Université de Strasbourg. The main objective of her project was to study histocompatibility genes in human transplantations. After her studies, she worked as a clinical research assistant at the Department of Orthopedic Surgery at Université du Luxembourg. In addition, Souad also has expertise in karate and collaborates with the Luxembourg National Team in karate to advise young athletes on the prevention of orthopedic injuries.

Objectives: Determine the cell-specific contribution of Dkk1 to impaired bone strength in T1D, investigate whether modulation of Dkk1 also affects the bone vasculature, validate the importance of Dkk1 in T1D patient cohorts. 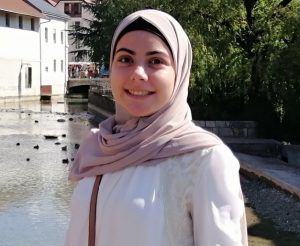 ESR3: Investigating the role of different diet regimens on bone health and fracture risk in T2D

Malak obtained her Bachelor Degree in Biology at the Lebanese University. After that she enrolled in the Master I program in Applied Animal Biology at the Lebanese University and continued with Master’s II in Physiology, Epigenetics, Development, Cell differentiation, and Cancer program at the University Grenoble Alpes in France. Further practical skills she optained during an internship in the team of “Analytical Immunology of Chronic Disease” at the Institute for Advanced Biosciences in Grenoble with a topic on the role of PD-1/PD-L1 axis in  Hepatocellular Carcinoma.

Mohamad completed his B.Sc. in Pharmacy at Beirut Arab University in Lebanon in 2013, followed by a career as a senior medical sales representative at AstraZeneca. In 2017, he pursued his M.Sc. in Epidemiology at Ludwig Maximilian University of Munich (LMU) in Germany. During his studies, he worked as a research assistant at the Institute for Medical Informatics, Biometry and Epidemiology (IBE) in Munich, and at the German Cancer Research Center in Heidelberg (DKFZ). He conducted his thesis at the DKFZ-division of cancer epidemiology, investigating medication use and its association with all-cause mortality in the European Prospective Investigation into Cancer and Nutrition (EPIC)-Heidelberg cohort. 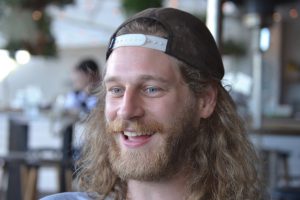 Sebastian completed his B.Sc. at the University of Bayreuth in Germany and obtained his M.Sc. from the BIOSS Centre for Biological Signalling Studies at the University of Freiburg. His thesis focused on the implementation of optically controllable cell adhesion receptors (OptoIntegrins, in parts published in Communications Biology in 2019). After finishing his Master’s project, Sebastian went to Sydney for an internship and continued working on optogenetics applied to T-cell receptor clustering at the University of New South Wales.

Objectives: To investigate changes in osteoblast bioenergetics in diabetes patients, and the mechanisms by which metabolic changes may alter the osteoblast phenotype

ESR6: Development of diabetes-sensitive computational models of bone strength for the clinical diagnosis and pre-clinical tracking of diabetic bone fragility

Cemre completed her B.Sc. in Manufacturing Engineering and her M.Sc. in Mechanical Engineering and Mechanical Design at İstanbul Technical University. Her M.Sc. thesis focused on using shape optimization methodologies to achieve the best bolt connection angles for proximal humerus plates and specialized in the Finite Element Method.

Objectives: Determine the contributions of cortical porosity and AGE accumulation to bone tissue mechanics in T2DM, and incorporate these into a novel, disease-specific FE model of bone strength. 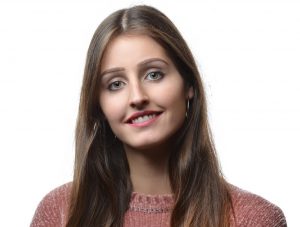 ESR7: Investigating the role of osteocyte and mechanotransduction on bone fragility in type 2 diabetes

Sara completed her B.Sc. in Cell Biology and Physiology at Université Blaise Pascal in Clermont-Ferrand, France, then obtained a M.Sc. in Cell and Tissue Engineering at Université Jean Monnet in Saint-Étienne. In a previous project she invastigated the effects of a ketogenic diet on obesity-related osteoarthritis.

Objectives: Identify osteocyte factors that are regulated by glucose metabolism and contribute to bone fragility in T2D, and characterise their involvement in the bone response to exercise and diet. 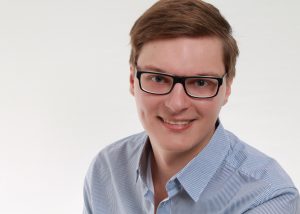 Matthias successfully completed his B.Sc. and M.Sc. in Mechanical Engineering at the Technical University of Munich specialising in Computational Biomechanics. He conducted his Master’s thesis at Beth Israel Deaconess Medical Center and Harvard Medical School in Boston, which focused on trabecular bone morphology. During his studies, he worked as a research assistant at the Mechanics and High Performance Computing Group at TU Munich focusing on soft tissue mechanics investigating vascular diseases.

Objectives: Develop bone imaging and computational methods for mechanobiological bone remodelling studies that can be run on desktop computers in the hospital/laboratory environment. Investigate the effects of diabetes on local mechanoregulation of bone remodelling in patients, identify its relationship to bone fragility and candidate biomarkers.

Ankita completed her Bachelors in Biotechnology at VIT University, Vellore, India in 2016. After graduation she worked as a project assistant at DBT-BUILDER, Anna University in India exploring the regenerative potential of Wharton’s Jelly derived-Mesenchymal Stem Cells. She pursued her Master degree in Regenerative Biology and Medicine at the Centre for Regenerative Therapies Dresden (CRTD), TU Dresden completed her thesis in the lab of Dr. Franziska Knopf, investigating the role of macrophages during bone development and regeneration in zebrafish.

Objectives: To identify those miRNAs that are differentially expressed between T1D, T2D and healthy adult control groups. To test the osteogenic, adipogenic, and proliferative potential of the most promising miRNAs via in vitro functional studies.

Sam graduated with a B.Sc. in chemistry from the University of Liverpool and went on to obtain a Master’s degree in neuroscience from King’s College London, specialising in psychiatric genetics. His M.S.c. project focused on using genetics to infer a causal relationship between bone fragility and Alzheimer’s disease.

Objectives: To leverage the evidence derived from GWAS studies to identify possible plausible molecular pathways involved in both skeletal and glucose metabolism, with particular emphasis on the overlap of the biological underpinnings of T2DM and fracture risk.

ESR11: Metformin effects on the diabetic bone and the interaction with the gut microbiome

Ruolin completed her Medical Doctor’s degree (M.D.) in preventative medicine at Sun Yat-sen University in China. She then went on to obtain a M.S.c degree in Omics from the Sino-Danish Center, consisting of two separate diplomas: one from the University of Chinese Academy of Sciences, and the other from the University of Southern Denmark, respectively. Her M.S.c project mainly focused on transcriptomics-based epigenetics in regenerative medicine. After graduation, Ruolin worked as a research assistant in the field of epidemiology and genetics of atherosclerosis at the National Center of Cardiovascular Diseases of China (also called Fuwai hospital).

Objectives: To investigate the effects of diabetes treatment (e.g., Metformin) on the decrement of bone quality, using an epidemiological approach combining different types of data for the assessment of bone parameters. Specifically, increasing evidences indicate gut microbiota plays significant roles in both diabetes progression, host metabolism and bone quality alterations. Whether the associations between metformin use and bone quality is mediated by gut microbiota will be explored by using state-of-the-art statistics analysis methods and deeply surveying other publicly-available datasets. 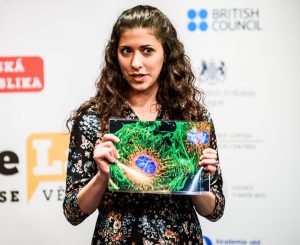 Sofie earned her B.Sc. in Forensic Analysis from the University of Chemistry and Technology, Prague. For her Master’s degree she specialized in general and applied biochemistry at the Department of Biochemistry and Microbiology. Her M.Scs. project focused on how Mason-Pfizer monkey virus is using the transport system of a host cell during infection. After her studies Sofie worked in the field of science popularization and communication.

David obtained both his Bachelor in Biochemistry and his  Master’s degree in Biotechnology from the University of Málaga, Spain, where he conducted mass spectrometry nuclear profiling of brain cancer cells In addition, he underwent placements both at the University of Ulm, Germany as well as at CNRS in Nice, France. After completing his Master project, David worked at the Charité Berlin, where his research focused on investigating the role of mesenteric fat T cells in Crohn’s disease.

Objectives: To characterize expression levels of miR-203a in different compartments of bone tissue from T2D and non-diabetic animals, and to identify novel mRNA targets under hyperglycemia compared to normal conditions. Predict and experimentally confirm the interaction of transcription factors with miR-203a promoter region, and to characterize miR-203a transcription in response to parathyroid hormone, sex hormones, and glucose. Investigate tissue expression as well as circulating levels of miR-203a together with its validated target mRNA levels in the context of onset and progression of T2D bone disease in clinical and non-clinical samples. 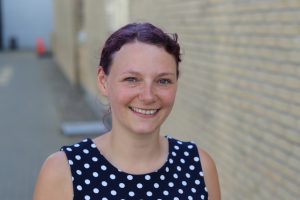 Annika graduated in Economics at Aalborg University, Denmark. Her Master Thesis is about the economics for Fecal Microbiota Tranplantation. She is interested in the development of research in health and health economics.